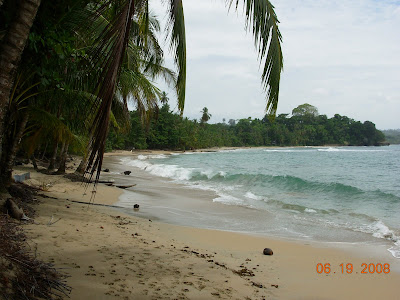 Our trip to the Caribbean coast was quite an adventure! We stayed near a little town called Puerto Viejo, on the Southern coast of Costa Rica. To get to Puerto Viejo on the Caribbean coast we drove 4 hours. We drove past banana plantations, inlcuding a "Dole" banana farm. The last 5 miles was on a terrible road full of huge ruts. Sometimes it was rutted pavement, but mostly it was 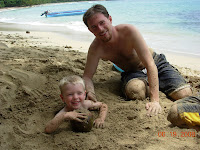 loose gravel with rocks of various sizes. I spent that last 5 miles wondering why Costa Rica didn't keep up it's only coastal highway (on the Caribbean side). Later I saw on the map that we had taken a road off the main highway. 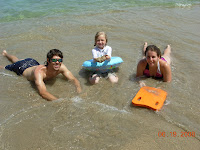 We stayed with our friends in a house across a small dirt road from the beach. There is a reef where we stayed and where we played so it was safe for the kids--no under toes to worry about. In total there were 13 of us, including the eMi staff and interns.

The Caribbean Coast is amazing! Very beautiful! The days were wonderful at the beach. Laura and I had lots of fun swimming and letting the waves carry us back to shore. Tanner and Tim were content to play in the sand. Our friends joined us both in the Ocean and at the shore! 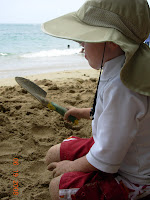 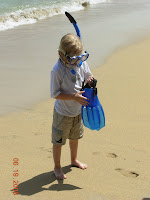 The nights, however, were awful! Mosquitos are a problem where we stayed so we had to sleep under mosquito netting. The kids would not keep their arms and legs in the netting so Tim and I each took a kid to sleep with and spent the night pulling their arms and legs back into our protective "tents."

There was a misunderstanding about how many beds the house had, so we ended up with one double bed and one single mattress on the floor--in the kitchen. We think this mattress had bed mites. Tanner ended up with around 100 bites! And thats after putting repellent on his skin, clothes, and the netting. The rest of us fared much better. 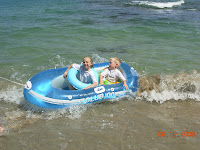 In the morning, just as the sun was coming up, we would listen to the howler monkeys "howl". They howl low, deep, and VERY loud, especially considering the monkeys were in the trees just outside our window. I felt much better after learning that it was a monkey making that howl and not a jaguar or something. Our windows did not have glass, just wooden shutters. Since it was so hot there you just sleep with the shutters open. I kept thinking something was going to come in the windows.

By day those same monkeys played, ate, and swung in the trees lining the driveway. When we walked to and from the beach they would throw fruit down at us. Luckily they had terrible aim. The kids love the Jungle Book movie where the monkeys do the same thing so they kept singing the "Bear Necessities" song from the movie as we walked down the driveway with fruit pelting the ground around us. 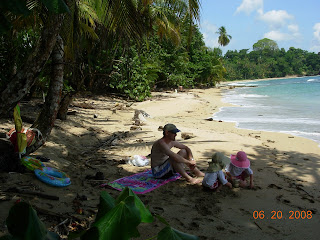 On our last day all the rest of our friends left in the morning and we stayed until 3 pm. There was no check out time which was so nice! As we drove home we got a flat tire. We pulled over at a restaurant/bar where we could all take a bathroom break (the restrooms had no light and the an 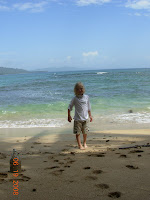 ts bit our feet) and find out where we could get a wrench which we needed to remove the spare tire cover. Thanks to God we were told that there was a mechanic shop nearby and we were able to borrow a wrench from there (we now have our own wrench). Tim finished changing the tire just as it was getting dark and starting to rain. God really looked after us because after this point the majority of our trip was on lonely mountain roads. 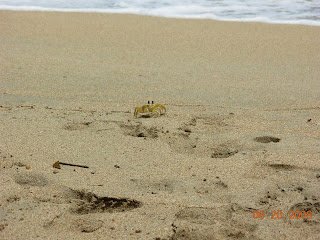 Shortly after arriving to Puerto Viejo our breaks began making a terrible grinding sound (though they still worked fine). For this reason we drove slowly all the way home. This added another hour to our trip. The mechanic later told Tim that something was "Muy peligroso"(very dangerous), but Tim didn't gather WHAT was dangerous. We thank God for his protection, and we thank you for your prayers!!

We were all very happy to be back "home" again in Tuis. We realized just how much we all feel at home here. The kids keep asking us when we'll go to the beach again so we'll have to plan another trip, when we're up for another adventure!