Laura and Tanner go to school! 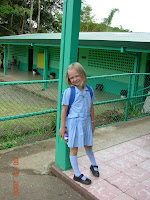 Today would be Laura's last day of Kindergarten in the States! Congratulations to Laura and her classmates who are now first graders (at least in the States)!

As you are all starting your summer vacations, school is still in session here in Costa Rica. The school year runs from early February through late November. School starts early each day at 7 am and goes until 10:30 or 11 am or from 12 pm until 4 pm. The older kids rotate their schedules every day so that one day they go in the morning and the next in the afternoon, but always for just half day classes until 5th or 6th grade. Kindergarten is always in the mornings. 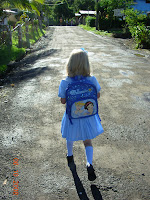 Our Spanish instructor, Sonya, is the sister-in-law of the kindergarten teacher at the local public school (just across the street from our language school) so she was able to arrange for Laura to "try"out the class. The kindergarten teacher, principal, and students are very welcoming and are happy to have Laura at their school. Laura loves going to school and it has been the best thing for her. After a successful first week, Laura now has a uniform and is officially enrolled. 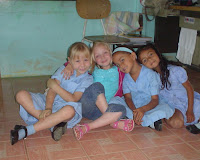 Kindergarten is pretty relaxed here with lots of play and hands-on art. It isn't so academic like in the States. The school work is mostly a review of what Laura did in preschool and early kindergarten. This is so good for Laura since she is not really getting a break from school this year. She will end up being in Kindergarten for over 13 months straight! 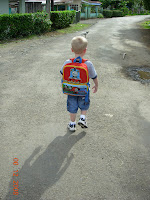 School for Laura has been such a success that we took Tanner to preschool yesterday! Both kids are very excited about school, making new friends, and learning Spanish. Laura has learned more Spanish in the last week than in the previous 5 weeks put together. I'm sure that she and Tanner will soon surpass us in their ability to communicate in Spanish. They are already correcting our pronunciation! 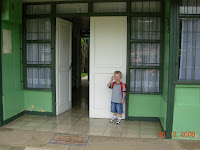 It was so precious to see them on their first day at school. Both were so timid and shy and scared. Both were resolved to be brave. Both were so proud of themselves for being brave and both were so excited to go back.

We are very proud of Laura and Tanner and very relieved to see them doing so well and settling into their new home! Thank you so much for all your prayers on their behalf.

God works all things! You were concerned about Laura resisting learning in spanish - and God worked it all out! I am so excited for them - and YOU! THis will give you the opportunity to focus on your own studies. Sounds like you guys are just doing wonderful. Just a little jealous over here - but OH so happy for you all!