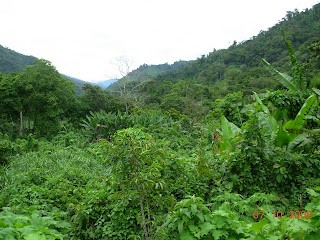 I am sorry to take so long to post my pictures of Chirripo. I hardly know where to start in sharing my experiences there. It was like nothing I've ever done before and aside from childbirth (and maybe nursing school), it was the hardest and yet most rewarding thing I've ever done or accomplished! 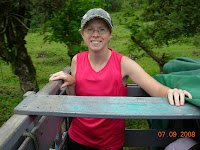 Our team gathered for prayer at CISA early Wednesday morning (July 9). We then loaded into the back of a cattle truck and rode for two hours on a bumpy road through the mountains to get to the Chirripo reservation. We rode until the road ended and from there we had to go on foot. We hiked for 7 hours that first day! We hiked down a large mountain on steep trails through thick forest/jungle, we hiked over a dried riverbed, across a huge and dangerous river, and through rushes taller than us.

We carried in wood to finish a building project at the village of Madarin. We had to leave the wood at another village as we were running out of time and the last two hours we hiked in the pouring rain. My pack kept throwing me off balance and I must have fallen 4-5 times. Both my knees looked pretty raw and I had bruises and scrapes up and down my arms and legs from my falls, from being slapped by branches, and from the wood tablet I helped carry which kept pinching my arms. 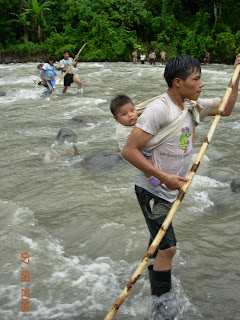 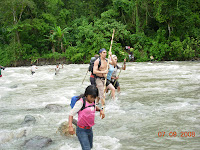 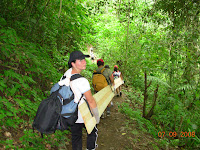 We stayed our first night in the village of Palmera where we helped to dedicate a new church. This was the first time that a team from CISA visited this village so it was a huge honor to be there. There were around 30-40 people present and many of the people of Chirripo had traveled farther than we had to get there. Mom's carried babies on their backs and crossed a wide and rapid river to get there! The service was by flashlight and candlelight with folk sounding guitar music and songs in Spanish. Our paster from Tuis gave a message in Spanish that was then translated into the local dialect.

Before the service I took a "shower" in the rain, washing my clothes, skin, and hair all at once. I then put on clothes that thankfully remained dry in my pack through the rain and waist deep water. Thank goodness that people who had been on the trip before gave me the tip to put all my things in plastic bags before packing them! 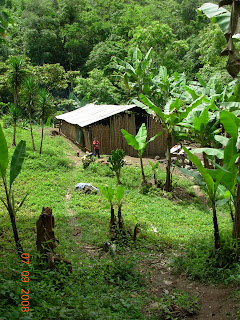 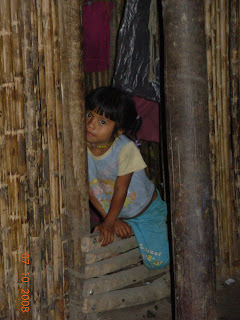 We all slept in a bamboo house with a thatched roof. It was a large house with three rooms. You entered the house through the first room and this is where we dressed and where I kept my bag. The dirt floor had turned to slippery mud so you had to watch your step. You then entered into a second room that had a small fire burning in the middle and had bamboo beds along the walls. The third room was similar to the first.

Since the majority of the people present had traveled many hours by foot to be there, we all slept under the same roof. I got to share one of the bamboo beds in the second room. Others from our team slept on pads on the floor. The indigenous people slept on large banana leaves on the floor and shared a log for a pillow. The small chickens lived and slept with the people. They were good for chasing and eating the various cockroaches and bugs that roamed the dirt floor. 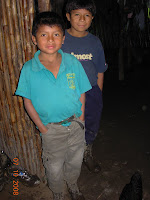 I didn't sleep so good and was awake at first daylight. I was very aware of how sore I was from such a long hike which ended with sleeping on a hard and bumpy mattress of bamboo sticks with only my sleeping bag as a cushion! I first lay awake and listened to the indigenous people laugh and joke together and then I sat with them around the fire and waited for the rest of my team to wake up. I shared some snacks with the kids and tried my Spanish with them. It was a surreal experience. Early that morning we set out for a 2 hour hike to the village of Madarin, which is where the teams from CISA usually go to minister. I asked how CISA became involved with Madarin and learned that some men from this village came into Tuis and asked for help. Since their village is so hard to reach and the trek to civilization is so arduous they needed the basics such as food and clothing and medical care. 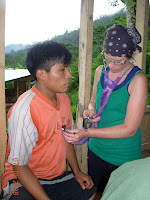 In Madarin some of the team worked with the kids teaching them songs, making balloon animals, and sharing the gospel with them. Others would have worked on construction but since we weren't able to bring the wood all the way they spent time talking with people. Some of the team and I opened a small clinic in the church. We saw many people who have never been to a doctor or a dentist, who don't even own a toothbrush, and who have medical problems that started two and three years ago! 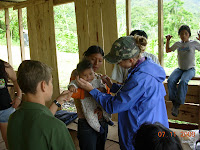 How wonderful it would be if a team of dentists and doctors/nurses could go there to treat the people. I did my best to advise and use the tools I had to assess and treat what I could. Others simply need to be seen by a doctor or a dentist. It was very rewarding and very sad at the same time. I am so thankful to have had help from others on our team in taking notes, translating, taking measurements of the kids, for bringing me drinks, saving me lunch, and helping me to pack up when we were done! Now I'm working on a spread sheet with patient information to pass on to a Costa Rican doctor who plans to visit this region... but not until Christmas time! 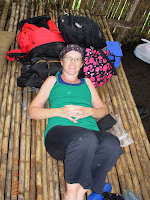 The second night I slept again on a bamboo bed, but this time I had a foam pad. I didn't even care that it was totally filthy. I also got my sore legs and back massaged with Cofal (similar to Ben-gay) which was sheer torture, but helped me to relax and sleep and then be able to hike again the next day.

I was up again at the crack of dawn and held another clinic from 6:30-8:30am. I also had a small line-up of team members, including myself, who needed blister care before we headed out. We made much better time going up and though I was sore, my "uphill muscles" were fresh so I found it much easier to go up than down or on flat ground. I have never hiked such a steep trail before and was very thankful that I hired an indigenous man to carry my pack. I think he made the trip up in 3 1/2 hours! I was proud of myself for making it back in 4 hrs and 20 minutes. Either way he got there long before I did! I should have hired him to carry me! 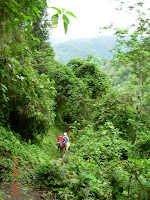 Once we all reached the top we took another cattle truck back to Tuis. It was so strange to go back to civilization, and I felt that the people of Chirripo stayed close to my heart and mind the whole trip. I am now training more by hiking even steeper trails around Tuis in preparation for returning to do another trip at the end of August. Now that I know what to expect and what the people need there I can expand my health kit. A member of our team is providing toothbrushes which I will bring on my next trip. Each person I see at the clinic will get a toothbrush with instructions on how to care for their teeth as well as how to care for their brush. I hope to add to the health charts that I started and see how some of the people are doing since I last saw them. 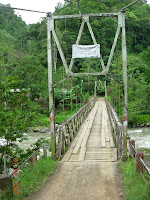 I recently found out that there is a Friday clinic in my neighborhood which serves the indigenous people of Tuis. I met with the doctor this last week and asked if I could volunteer at this clinic. He said yes and I should be able to start in about three weeks when he gets back from vacation.

If anyone is interested in sending supplies to Chirripo you can send them to the CISA at: CISA, 28-7150, Turrialba, Costa Rica. Care packages with clothes for children and adults (size small-medium for both men and women), sewing kits, baby blankets and supplies, small toys, hygiene supplies would all be much used and appreciated. Another big need is long, dark colored, athletic or hiking socks to wear with their rainboots--the only shoes they wear if they wear shoes at all. 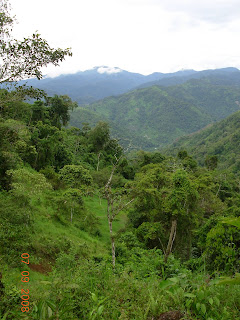 Thank you so much for your prayers. There were many times on this trip where we had to have had guardian angels watching over us. Steep trails, crossing a dangerous river four times, etc. I also could not have gone without Tim's support and willingness to parent alone in a foreign land while I was away. Thank you Tim!

Thanks for sharing about your trip! You are in my prayers. Rebeca