Tanner goes to "Colina Azul" (Blue Hill), just outside of Atenas. It is a small, private school for preschool through 6th graders. Class size is small and there are several other English speaking students from the U.S. or Canada. Though the school is not bilingual, several teachers are bilingual. 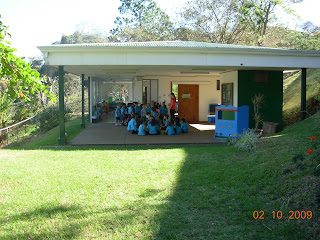 We chose this school for Tanner because of the small class size and better access to English speakers should he need it. Though there are public preschools, the class size is very large with just one teacher and no English. We felt this would be too overwhelming for an introduction to school especially since he was scared to go. The goal for this year has been to get Tanner acclimated to school and help him feel comfortable being away from Mom and home. Next year he'll brave complete Spanish immersion at the public school! 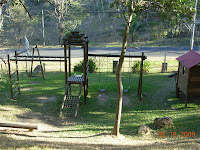 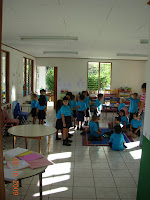 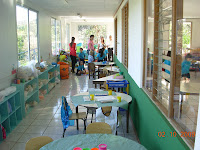 Colina Azul starts it's school year at the beginning of February and ends at the end of November. Tanner's school day is from 8 am - 11:30 am, Monday through Friday. Preschool and Kindergarten share the same large room in a Montessori style setting. They have a classroom apart from the upper grades. Though the preschoolers and kindergartners do many things together, each class or group has their own teacher and there is an aide that helps all three groups. Tanner's group has 7-8 kids. The school is very organized, uses textbooks, and gives good notice of any changes to schedule (basically is run much like a school in the States). The school has a nice, wooden playground so recess is a favorite part of school. Tanner also has swim lessons and P.E. every week. 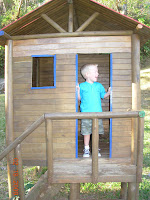 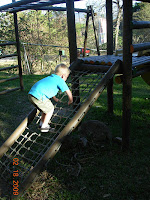 Tanner takes a bus to school in the mornings and either Tim or I pick him up in the afternoon. We recently started giving his teacher and the pre-3's teacher a ride home which has been so exciting for him. It's fun to learn more about what he's like at school. I have been learning that Tanner is very social at school and quite the talker in both languages. He'll speak English with his American/Canadian friends and then switch to Spanish for his Spanish friends. His teacher says that he makes friends easily and the kids all want his attention. 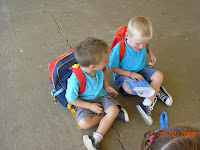 Tanner's best buddy Jake moved back to the States and he has been sorely missed! Then a new friend moved here from Canada and she even lives at Jake's house. 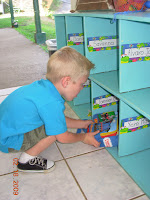 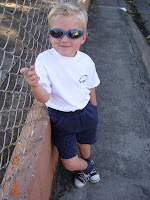 Tanner has grown up so much since starting school. He has become very confident and independent. It's so nice to see him making friends and being more social, too. He comes home every day and tells me about his friends. He knows everyone's name and says them with a perfect accent. School has been so good for him!