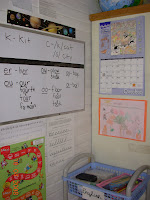 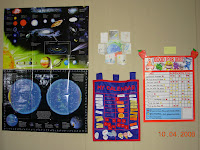 Over the last month our home has turned into a classroom as we have been working with the kids daily on home school work. Our walls are decorated with charts, school projects, and Laura's artwork. Our time has been very full with our own Spanish studies as well as teaching Laura and now Tanner who was begging us to do school with him, too.

It is very fun and rewarding to teach our children and to watch them learn and grow. It is also a lot of work and is very tiring! The biggest challenges are keeping Tanner from distracting Laura and working around Laura's short attention span. 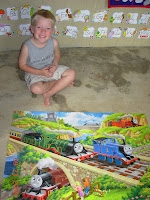 Laura likes best to write, draw, do hands on projects, and memory work. Tanner likes anything from workbooks to puzzles and games. I think he loves the attention more than anything else! Tanner is also doing early reading and writing which is exciting for him and for us! The lessons we do incorporate songs, poems, chants, artwork, and/or hands on activities.

In Math we play store to help Laura learn to count money and to add two digit numbers. She got to set up a store and called her store "Old Maid Checkers" 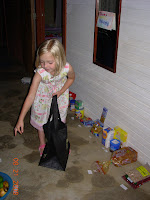 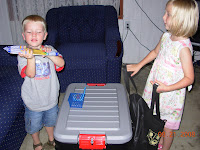 Another thing we do is sing a silly song we made up called "The Congruent song" where Laura finds shapes around the house and sings whether or not they are congruent to a particular shape that I hold up. 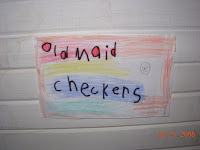 In grammar Laura learned to classify groups into subgroups using things from around the house. 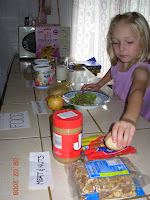 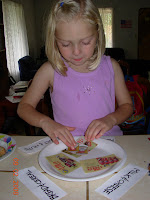 In History Laura got to be an "archeologist". I buried things in the dirt and Laura got to dig them up and talk about what she could learn about a civilization if that was all the information she had. She later played archeologist on her own and found a toy in the yard that she cleaned up and brought inside to show me how she discovered that a little girl used to live at our house. I tried hard not to laugh as I told her that it was her own toy that she had left out in the yard the previous week! 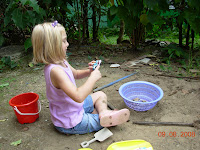 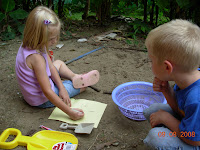 In Science we decorated the house using fall decorations and dried leaves from Oregon and the kids also got to hang up a mobile, stickers, posters, and a border of outer space. Today Tanner didn't want to get dressed because his pj's were his spacesuit and he wouldn't be able to breath without it. I told him that his room was a space station with oxygen and that it was safe to get dressed into his new space suit (his clothes for the day)! 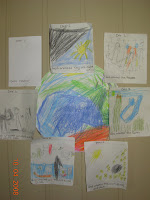 For Bible Laura made a collage of the earth and drew pictures of what happened each day of creation. She is memorizing the days of creation along with different Bible verses about creation. Laura usually learns her Bible verses in one sitting and then tries to teach them to Tanner who isn't so interested and says "I can't do that, I'm not in first grade."


In Penmanship Laura is learning cursive writing. She loves it and is doing so well with it. I keep finding little pieces of paper around the house with her cursive signature written on them. 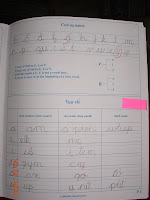 Laura still does kindergarten at the local public school from 7-10:30 am. She then has free time to play with friends and do as she pleases (within reason) until we start homeschool after lunch at 1:30 pm. We then do homeschool for 2-3 hours. After school we do outside activities like go for a walk or play at the local soccer field until it gets dark at 5:30 pm. 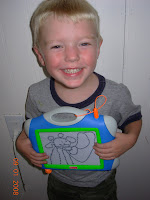 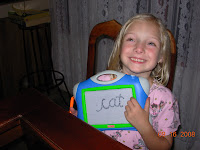 everything and speak well.

We have started to incorporate Spanish in our home by speaking in Spanish during lunch and dinner. It's fun to hear Tanner and Laura converse with each other (and us) in Spanish.

Tim and I are feeling like "we're going to make it." It is less work to understand things and we are able to converse with relative ease. We are far from fluent and still make many mistakes (which we often recognize as soon as the words are out of our mouth), but we are happy with our progress. When do we have time to do our homework? I do mine when Laura is working on any written school work or after the kids have gone to bed at 7pm. Tim gets his work done any spare moment he has. Our lives are full of school these days!